Allison and her family 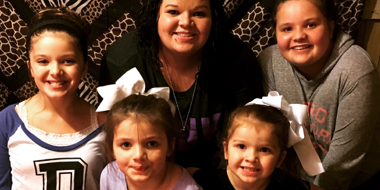 Every family needs a home where they can feel comfortable and secure. Marie Walker knew that she needed a better home for her four daughters Krista (11), McKenzie (9), Kaylee (5), and Makaelyn (4).

Marie and her daughters currently live with her friend because the condition of the house they were renting previously became impossible to live in. The house did not have central air or a good electrical system. As a single mother, Marie tried her best to keep her children warm during cold weather and cool during the summer. However, it was unbearable to stay in their rental house during winter, which led to Marie and her four daughters moving in with their friend.

One of Marie’s coworkers suggested applying for the Knoxville Habitat program. To qualify for a Habitat home, homeowners must 1) have a need for housing, 2) have the ability to pay a mortgage and 3) be willing to partner with Habitat, completing a homeowner education program (provided as part of the Habitat mission and ministry) and investing 500 hours of “sweat equity.”

After going through the application process, Marie and her daughters became eligible for the program, and now she is on her way to providing a better future for her family. “It’s hard to be a single parent of four trying to make ends meet and pay off a high mortgage.  I would never be able to pay that off. But with Habitat, there is no interest on the house, and they work with your income,” says Marie.

Krista, McKenzie, Kaylee, and Makaelyn participate in many different athletic activities; however, gymnastics is their favorite sport. Currently, all four girls are involved in the basketball.

Marie has learned a variety of skills that will provide guidance with owning a home, such as home repair and how to be a good neighbor. The budgeting classes also provided her with direction on how to pay off medical bills.

Marie anticipates the exciting moment to come … when she will finally achieve her dream of homeownership.

“Now I can tell my girls that we are going to have our own home,” says Marie.