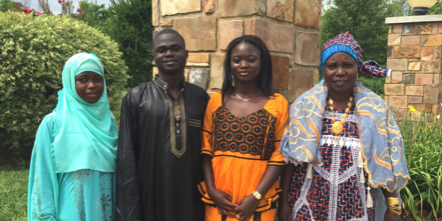 Layee lives in a small apartment with his mother, Fanta, and two sisters, Sita and Marcher. Layee supports his family by working as an agent for a rehabilitation facilities group, and both of his sisters are in school – one is in high school and involved with track, while the other is in her first year at Pellissippi State Community College. At home, this close-knit family likes to cook together.

This family has overcome many dangers together to make it to Knoxville, and they are so grateful to live in a city they can finally call “home.” They are originally from Liberia, a country on the West African coast. The name Liberia means “Land of the Free,” but that is not how Layee and his family remember it.

Now that they have a city to call home in the U.S., they also look forward to having a decent, affordable “home” as well. Although they no longer face the level of danger they’ve experienced throughout their lives in West Africa, they still witness activities in their apartment community that still do not give them the security they need.

“It’s not very comfortable. We see some stuff going on (in the apartment community), and we don’t want it to happen to us.”

That is one of the reasons Layee’s sister suggested the Habitat for Humanity program. Layee applied for homeownership, and since then the family has been working hard to invest 500 hours of “sweat equity” through homeowner education classes and volunteer time.

Now, Layee and his family looks forward to finding strength, stability and independence through a decent, affordable home.

“Living in a house that we own will change our lives … We are not used to living like that,” says Layee.

“We will be so glad and happy.”