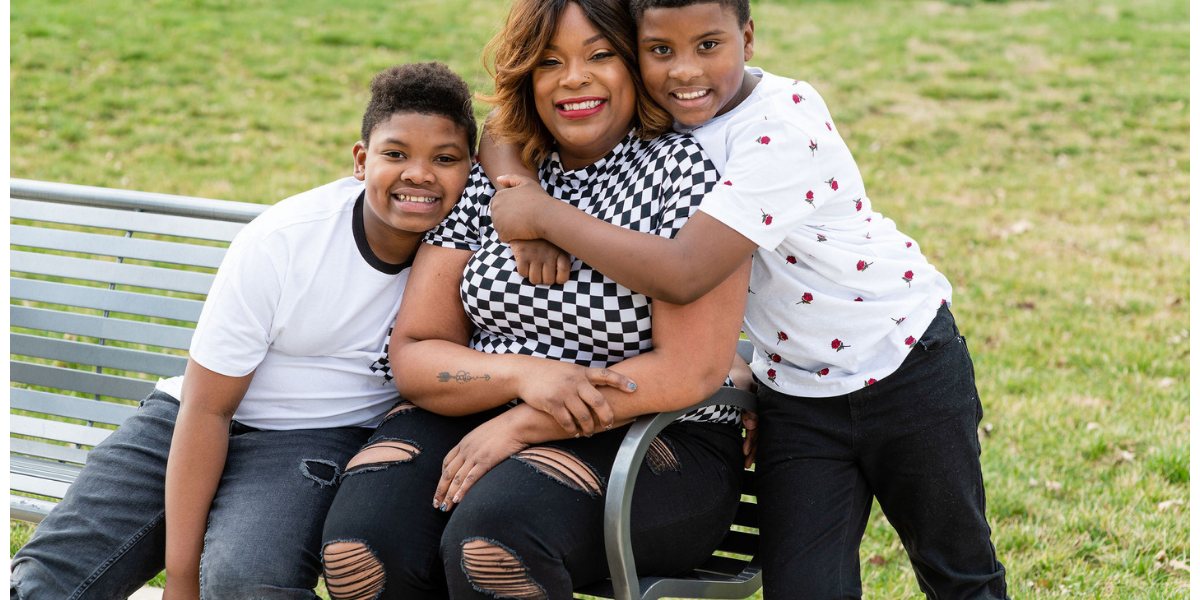 Koresa is a confident mom, businesswoman and overcomer who has worked hard to get where she is in life. Now, she is ready to take the next step in establishing self-reliance by building a new home with the help of other strong women and Knoxville Habitat for Humanity.

Growing up in an unstable home has given Koresa the drive to work hard to achieve her goals and dreams. She grew up in Knox County as the only child of a single mother. They moved a lot as she grew up, attending 7 different elementary schools as a child.

Knowing she wanted more out of life, Koresa worked to put herself through undergraduate school. She earned a bachelor’s degree in business, but quickly learned that she was unable to get a job on her degree alone. As a firm believer in education, Koresa decided to enroll in cosmetology school.

She had her two sons, Brandon and Bryce, while attending classes and celebrated her graduation in 2012. She graduated on a Saturday and started work the following Tuesday. Her new boss taught her about the trade of cosmetology, while Koresa shared her knowledge of business with her boss.

Koresa continued to work as a cosmetologist and eventually hired an assistant to help her. This decision led her to the opportunity to open her own salon, which is evolving into a thriving business. She now has four employees and three booth renters. As a testament to her success in her field, she won the “Rising Star” award at the 2019 Beauty and Fashion Gala.

Aside from her business, Koresa is deeply involved in bettering the community by being a role model to young girls. She currently volunteers for Girl Talk Inc, which is a program designed to “empower girls to become their best selves.” She also attends career fairs at local schools to speak to students about the cosmetology business and the importance of education. She believes in a community of women empowering women and strives to play her part in that vision.

Despite her success as a business owner and hard worker, Koresa has been unable to obtain an affordable mortgage in a safe area of town. Koresa currently lives in a two-bedroom rental with her two sons, now 8 and 10, and her mother. Brandon and Bryce share a room, while Koresa sleeps on the couch so that her mother can sleep in her bed. Even though she has tried her best to provide a better life for her children, they still often hear gun shots from nearby neighborhoods.

Unfortunately, stories like Koresa’s are not uncommon. Home values in Knoxville have increased almost 10% since 2005, which makes it even more challenging for single moms like Koresa to afford a traditional mortgage on their own.*

Koresa is a firm believer that Knoxville Habitat is, first and foremost, an educational program. She believes that “it is important for us to be educated [and] open to education.” She hopes that sharing her story will help “squash the misconception” that the Knoxville Habitat program is a giveaway.

Since entering the Knoxville Habitat homeowner education program, Koresa has learned the importance of financial literacy and says:

It’s important for us to have the financial literacy. We lack that in our community and it’s not because [the information] isn’t out there. It’s because people either don’t know how to get the information or they are comfortable and don’t care, they’re stagnant.

With the support of Knoxville Habitat, Women Build sponsors, fundraising volunteers and other gracious donors, Koresa and her family will achieve the strength and stability that only comes with affordable homeownership.

Women Build is your opportunity to join women from our community in spotlighting the housing challenges local women face while helping to build a safe, affordable and permanent home with Koresa and her family.