Kendra and her family 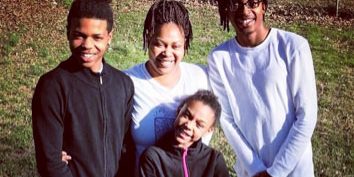 Kendra tears up when she begins explaining why having a home of her own is important.

“To have not just a house, but a home, and it will be mine! My kids have seen me struggle to keep a roof over their heads. I applied to Habitat for them, and I stuck with it for them, too.”

Like so many applicants, Kendra was turned down the first time she applied. But when we (at Knoxville Habitat for Humanity) have to say “no” to an applicant, we always explain why they were declined and what they need to do in order to be successful next time.

Kendra has heard “no” a lot, so she wasn’t very optimistic when she re-submitted her application. In fact, she carried the application around in her car for over a month delaying what she believed would result in just another rejection. Her son finally talked her into dropping it off at the Habitat office.

Several months went by when she received a call at work from her kids, telling her she had received a letter from Knoxville Habitat in the mail. She didn’t want them to open it and be disappointed, “but they were just so excited, I couldn’t say no,” says Kendra. “I was overwhelmed when they told me I’d passed the application process and {Habitat} wanted to meet with me.”

Kendra, who has worked as a Certified Nursing Assistant (CNA) for over 7 years, said that attending the weekly budgeting class was hard at first. She had to discipline herself to account for every penny she spent. She’d never done that before, but now that she has learned to do it, she proudly shares that she has money left over each month.

When Kendra began taking the homeowner education classes, she knew it was the beginning of a turnaround for her and the three children. The tiny two bedroom house that she’s rented for 7 years is in need of tremendous repairs that her landlord will not make. Kendra has been doing what she can on her own just to keep the house safe and vermin-free, but she is constantly finding holes to patch in order to keep rats out of the house.

Kendra is so excited that, in just a few months, her children will have a new home where they can be proud to bring friends over, and she will have an affordable mortgage less than the $600 a month in rent she is now paying.

It is quite fitting that the 2017 Women Build sponsors and volunteers are partnering with Kendra – a strong, determined single mom willing do to whatever it takes to make a better life for her children.