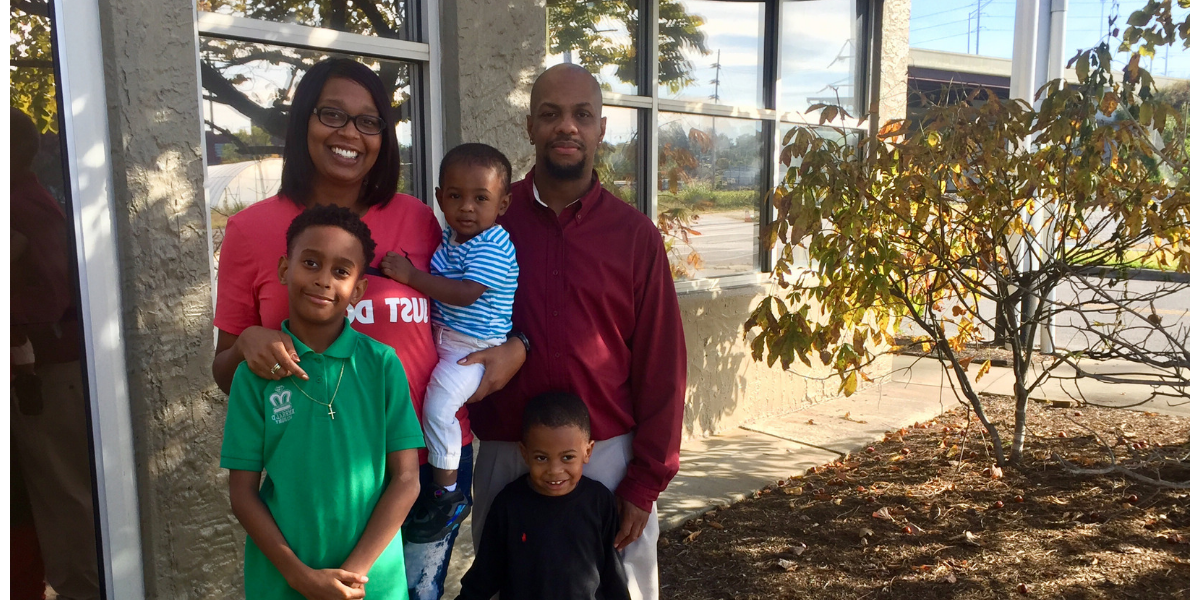 Johnnie and Tiffany are the proud parents of four sons, all full of personality and energy. The oldest of the children living at home, Julius (9), is the family jokester and constantly keeps everyone entertained. Eli (3) is the most laid back of the bunch, while Ace (1) is “the boss” of the family and always has a smile on his face.

Johnnie works full-time in city transportation and Tiffany works as a full-time Certified Nursing Assistant. Even though they both are hardworking parents that want the best for their children, the two would never have the means to qualify for a conventional home mortgage.

This family’s journey with Knoxville Habitat for Humanity started years ago when Tiffany initially applied for the homeowner program but was denied. Even though she still dreamed of owning her own home, she thought that it was not meant for her and her family. Her coworker, a current Habitat homeowner, insisted that she keep trying. When she received an unexpected check, she initially thought about using that money to go on vacation. Her coworker convinced her to pay off some debt so that she could reapply for the Knoxville Habitat program. With this help and encouragement, Tiffany was able to reapply for the program and was accepted! Since entering the program, Johnnie and Tiffany have been attending budgeting classes to prepare for their future as homeowners. This class has helped them know “where [their] money is going” and how to save.

Johnnie, Tiffany and their children currently live in a three-bedroom rental, with Ace and Eli sharing a room. Their rental is on a busy street with no sidewalks. They also have no back yard where the children can safely play. Also, when Johnnie’s oldest son, Jonnie II, visits on the weekends, he does not have a bedroom of his own.

When asked about the new home, Julius has big plans. He is excited to have a basketball goal in the driveway and looks forward to teaching his two younger brothers to play football in their new yard.

After years of struggling, Johnnie and Tiffany are so thankful for the opportunity to build a safe, affordable home for their children. Owning a home has always been a dream of Tiffany’s … She “thought it may never happen – but it finally is.” Johnnie looks forward to investing in his own home and no longer “living in someone else’s house.”  The most important part of this experience to him is that “the kids will have somewhere to come back to when they get older” that will truly be “home.”